WHO IS JENNIFER WATERS 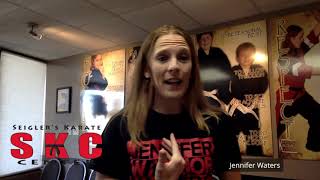 😮Your looks DO determine your value….🤷‍♀️

If you ask someone, how did you become famous, 9 times out of 10 they are not saying it’s because they got lucky. My dad has a great...

Jennifer started her training in martial arts at 2 years old under the tutelage of her father and lifelong martial artist, Tommy Seigler. It was very clear from the beginning that martial arts was in the blood. She earned her 1st Degree Junior Black Belt by age 8.

Along with her own personal training, Jennifer co-owns her family's martial arts school, Seigler's Karate Center.

Jennifer's career as a fighter started at an early age in karate and jiu-jitsu tournaments. She was a beast on the mat and never backed down from a challenge.

In 2016, Jennifer shocked the Amateur Kickboxing world by winning the Bantamweight IKF Kickboxing World Championship against an up and coming sensation, Andrea Leese.  Within just 3 weeks in between her kickboxing matchup with Aracelly, Jennifer entered the cage to fight and win in her debut fight against Chante Sanders in USFFC:29.

Jennifer and her husband Titus successfully completed their adoption of their son in early 2018 and then began fight camp to compete in October 2018 for the IKF US National Flyweight Kickboxing Championship in a 5 round battle against Lillie Helton.

In 2020, she entered the world as a pro against Taylor "Killa Bee" Starling, winning her 5 round kickboxing matchup.

Today, Jennifer continues to train for her upcoming kickboxing and MMA match ups. She represents the Warrior spirit of perseverance, focus, and determination in and outside of the ring.